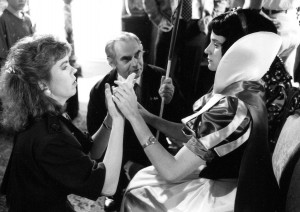 Deaf-Blind actress, Kim Powers (right), receives instructions from director, Sheldon I. Altfeld, through tactile interpreter Molly Sheridan during production of the award-winning series entitled “Kim’s World” which Altfeld produced and directed in 1991. “Kim was one of the most natural talents I have ever worked with,” Altfeld stated. “And Molly was a perfect ‘co-star.’ I often refer to this series as one of my greatest achievements — considering that I had Kim ski down a mountain, scuba dive, stick her hand in an elephants mouth and perform many tasks that people would have said were impossible for a person who is both deaf and blind.” The series won the coveted Barbara Jordan Award presented by the President’s Committee for Persons With Disabilities, among other accolades. 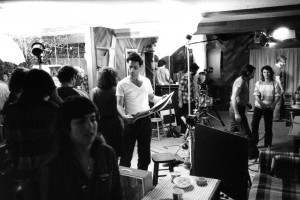 Call this “Organized Chaos.” Following the receipt of a $45,000 grant from Group W Cable in 1982, Executive Producer, Sheldon Altfeld set out to create as many programs as he could in as short a time as possible. So, for a total cost of $950 per episode and a crew of 12, they shot 47 half-hour programs, in three different locations, IN SIX DAYS — at the rate of eight shows a day — integrating music, titles and captions live on-set, with no post production necessary. Needless to say, the crew didn’t speak to Altfeld for several weeks after that. Among those seen in the picture are Scott Berg, Mike Stone, Laura B. Ripplinger and Kevin D Mills. 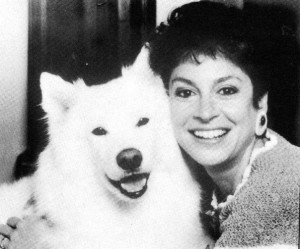 AN AMAZING DOG AND A TALENTED ACTRESS

Actress Linda Bove (Linda The Librarian on “Sesame Street”) cuddles up to Tundra The Wonder Dog in the Silent Network series “It’s A Dogs Life.” 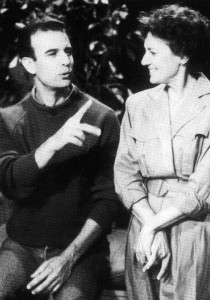 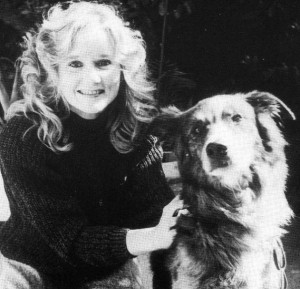 FROM SILENT NETWORK TO NAD PRESIDENT!

Actress Bobbie Beth Scoggins, with an unidentified mutt, co-star in the series “A Partnership With Man.” Bobbie went on to become President of the National Association of the Deaf. 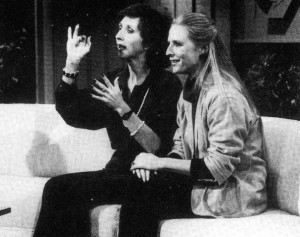 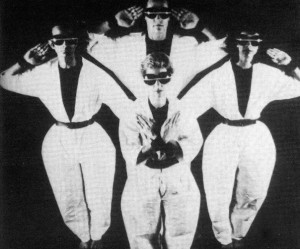 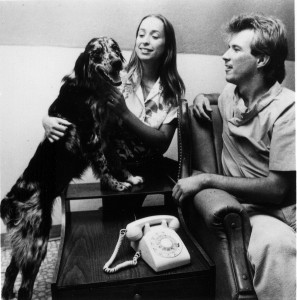 A LOOK AT DOGS FOR THE DEAF 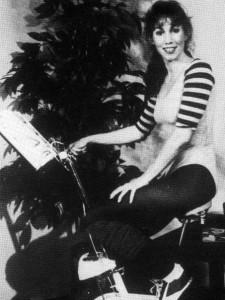 FEEL BETTER WITH A LITTLE EXERCISE

Aerobics instructor Pam Larson, the hearing daughter of Herb Larson. star of the Silent Network series, “Off-Hand,” is featured in the series “Aerobisign.” During a marathon taping schedule, she actually recorded eight half-hours on one day and five the next to complete the 13 episode series. After having exercised non-stop for a day and a half, she was carried her out on a stretcher. 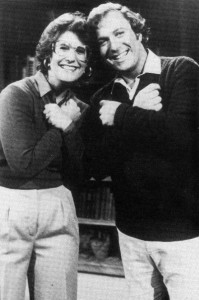 The vaudeville act of Sharon Neumann Solow and her husband Larry Solow starred in the 40-episode series “Say It With Sign,” which ran for two years on the NBC owned and operated stations across the country, and was written and produced by Silent Network founders Sheldon I. Altfeld and Kathleen Gold. The series taught basic sign language and received the first of a dozen Emmy nominations the Network ultimately received. 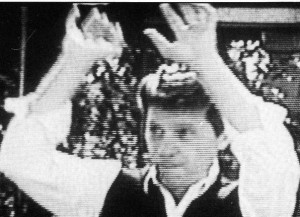 Actor Robert Walden (“Lou Grant”), hosts a unique look into the lives of a deaf couple with a hearing daughter who was heading off to college, leaving the couple without their “ears” for the first time. Titled: “A World of Quiet,” the special aired on ABC. 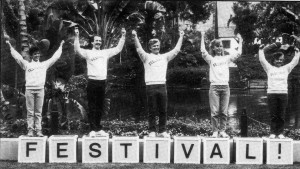 One of the most popular TV shows on The Silent Network was “FESTIVAL” featuring (from left) Terrylene, Robert Daniels, Ed Waterstreet, Julianna Fjeld, and Fran Ripplinger. The series was one of the only productions allowed to shoot on the grounds of the Self Realization Fellowship’s Lake Shrine in Pacific Palisades, CA. 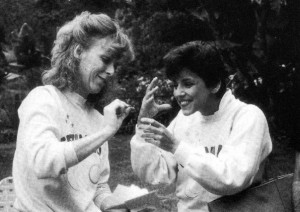 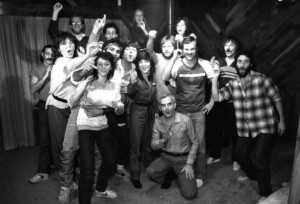 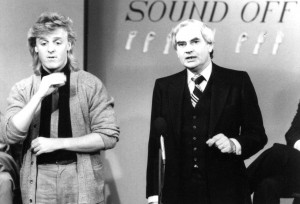 NOTHING LIKE A GOOD CONTROVERSY TO START A CONVERSATION

The ultra-talented actor-interpreter Bill Pugin serves as interpreter as Silent Network founder, Sheldon I. Altfeld, introduces “Sound-Off,” a one-hour special devoted to the controversy of the Cochlear Implant. 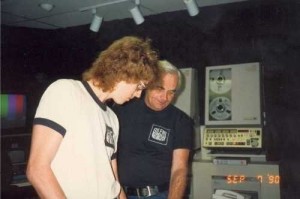 THE MAN WHO KEPT US ON THE AIR

David Pierce, a graduate of the National Technical Institute for the Deaf, started in the Silent Network library counting videotapes and ultimately became Vice President of Production and Network Operations — a job he held until 2000. (Note that this is one of the extremely rare photos of David not wearing his signature hat). Also, this photo was taken at the fabulous Maverick Video Productions studio in San Antonio, TX., where the network moved from LA to San Antonio after it was sold in 1990. Without the gang at Maverick, there would have been no production, no accolades, no awards, no fun whatsoever. Sheldon I. Altfeld, the Network’s founder, was hired to produce and direct the initial programming for the new owners and with the help of David Pierce, managed to crank out more than 200 half-hour programs in less than a year. 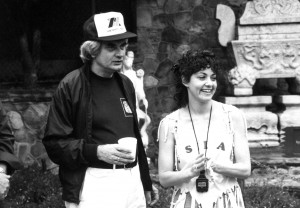 A LOYAL MEMBER OF THE PRODUCTION TEAM

Dawn Jeffory-Nelson, who served as Vice President of Programming for The Silent Network for several years, is pictured on a set with a bushy-haired Sheldon I. Altfeld, the Network founder. Her loyalty was unquestioned. Note that her T-shirt has Altfeld’s initials, “SIA,” brilliantly displayed. In actuality, her T-shirt reads FESTIVAL, but some of the letters mysteriously didn’t photograph. As Altfeld stated: “It’s good to be the King.” 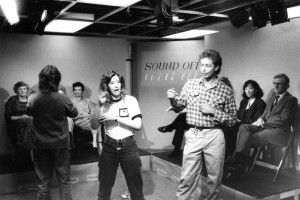 FROM SKI SLOPES IN IDAHO TO SLIPPERY SLOPES IN HOLLYWOOD

Producer-Director David Butterfield, with interpreter Cath Richardson Kiwitt, addresses the audience prior to production of the one-hour special, “Sound-Off,” which explored the controversy in the deaf community of the Cochlear Implant. Butterfield was an early recipient of the Implant. 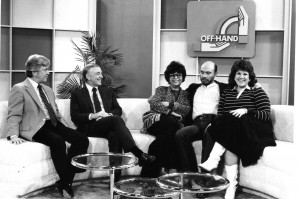